The heavy scent of exhaust steadily rose through the air as a caravan of buses lined up along West 78th place, outside of Saint Sabina Church.

The bright blue skies quickly transitioned into a dark blue glow that illuminated the street where the church is located. A gentle breeze carried with it the energy and excitement of hundreds of Chicagoans, ready to make the 12-hour journey from Chicago to Washington D.C. to participate in the “National Rally to End Gun Violence.”

Led by Father Michael Pfleger, the caravan of buses were set to embark on the 700-mile journey in an attempt to prevent any more blood from flowing onto the already blood-riddled streets of Chicago.

Father Pfleger discusses where the idea for the “National Rally to End Gun Violence” came from, and what the main goals of the rally are.

The blue glow across the Windy City sky slowly darkened as men, women and children of all ages slowly trickled from the sidewalks into the PJ Luxury buses lined up along the street. The remaining volunteers boarded the buses, and the caravan took off with a police escort at around 8 p.m.

The mix of various conversations rang throughout bus No. 1 as St. Sabina — and Chicago — began to shrink in the rear-view mirror. The bus driver turned out the lights that lined the corners of the ceiling, and the engine of the bus roared deeply.

Footage of vigils and grieving family members lit up the dark interior of bus No. 1, as a tribute played from the TV monitors.

Shortly after, “The Hate U Gave” began projecting, captivating most passengers. The voice of Amandla Stenberg‘s Starr Carter blared over the speakers as she explained the difference between “Garden Heights Starr” and “Williamson Starr.”

Tears began to flow from some passengers as the movie began to reach its climax before the humming of the engine halted, signaling that we were at our first stop.

The caravan moved along, as sunlight gradually seeped through the tinted windows to greet groggy passengers. The buses made one final stop to allow them to change clothes if they needed to before completing the final hour-and-a-half of the grueling 12-hour marathon to Washington D.C.

Barren highways soon led to the beautiful Washington D.C. skyline. One conversation turned into two, and two into four, until the entire bus filled with the same buzz that occupied it at 8 p.m. the night before. Music began blaring as the destination inched closer with every passing mile. Passengers were anxious to finally spill out onto the spacious Washington sidewalks. They were excited, they were exhausted — but more imporantly — they were here.

Passengers on “bus number one” prepare to take to the streets of Washington D.C. while music blares in the background.

The caravan completed one of the two 12-hour drives. Passengers slowly made their way onto the sidewalk of the Washington Court Hotel. There was about an hour until the rally was set to begin, so groups split up with the intention to meet back up at 12:15 at the Starbucks located across the street from the hotel.

Johneece Cobb — one of  many Chicagoans who lost a loved one to gun violence — made her way along with others towards the steps of Capitol Hill to ignite the rally before it officially begun. For most of the rally participants, today is about honoring a loved one just as much as it is pushing for gun legislation.

“Edwin was 19-years-old when he was shot and killed,” Cobb said, “Edwin was very smart, very intelligent, very bright. He was an aspiring musician…before he could crawl, he was making beats on the floor on pots and pans.”

Cobb spoke as if this was the thousandth time she told the tragic story. Joy, pride and sadness all at once formed on the woman’s slightly wrinkled face while protestors chanted on the steps behind her. She seemed proud to speak about Edwin, but broken over the fact that her seemingly-promising story about him always took a sharp, heartbreaking turn.

“He loved life, and his life was taken too soon, and his case remains unsolved 56 months later.”

A majority of people who wore black T-shirts with the words #endgunviolence in white emblazoned over the chest stood in solidarity with each other as they shared the same unfortunate story.

Pictures of those slain were encased within golden frames as mothers, fathers, sisters and brothers carried them throughout the day. Everywhere you turned, there were pictures representing lost lives. It can be argued that there were more pictures than there were people in attendance. It wasn’t only about justice, it was about survival — ensuring that not another person or child will spend their last moments staring down the barrel of an AR-15.

A sea of black shirts and colorful posters began forming on the West Lawn of Capitol Hill as the rally festivities began around 1 p.m. Guitars strumming blared through the speakers as those on the stage and those in the crowd sung “We Shall Not Be Moved” in unison. Father Pfleger then approached the podium to give a passionate speech about what he feels needs to be done in order to stop gun violence in Chicago.

Father Pfleger addresses the crowd during the rally.

The rally raged on as politicians took the stage such as Speaker of the House Nancy Pelosi, Senate minority leader Chuck Schumer, and representative John Lewis among others. Common, a famous rapper, and native Chicagoan, also attended the rally to speak and stand with those in attendance. 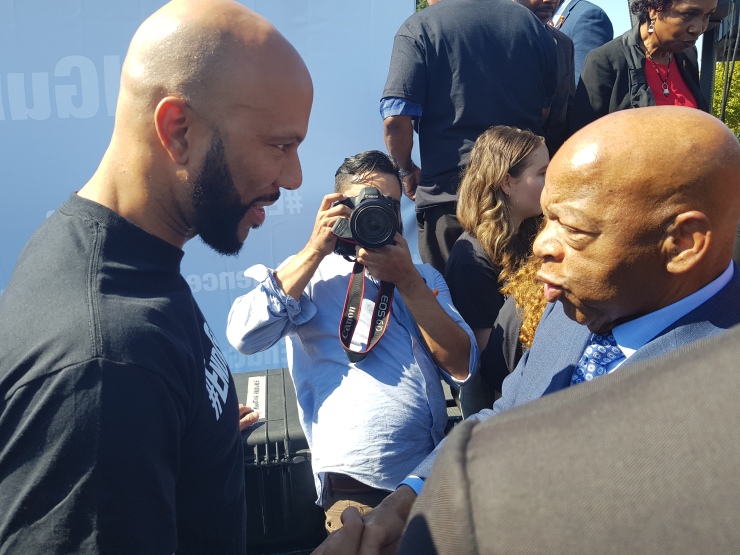 Clouds were few and far between, creating unseasonably warm late September heat. The fronts of black shirts were moist with either sweat or tears — sometimes both — as the crowd stayed committed to giving it their all until the rally concluded. News outlets from ABC to WGN had cameras set on the stage as well as around the lawn to cover the rally. 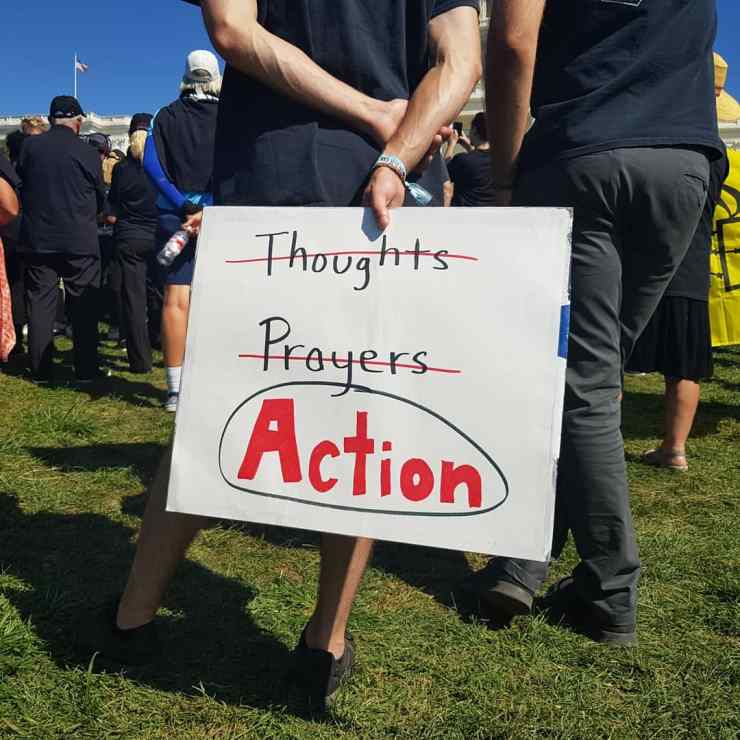 A protester firmly gripping onto his sign as the rally continues.

As the rally neared its conclusion, all attendees were asked to lie down on the grass while a rendition of “Amazing Grace” was sung to pay respect to those who lost their lives to gun violence. Hundreds of bodies laid scattered over the lawn of Capitol Hill, while hundreds more lay six feet below them back in Chicago. Somber looks and tearful faces swarmed over the attendees, as thoughts of what could’ve been—and the harsh reality of what had become—grew with every ear-piercing note.

Those in attendance lower themselves to the ground to honor those killed by gun violence while Amazing Grace plays in the background.

Various moments leading up to and at the “National Rally to End Gun Violence.”