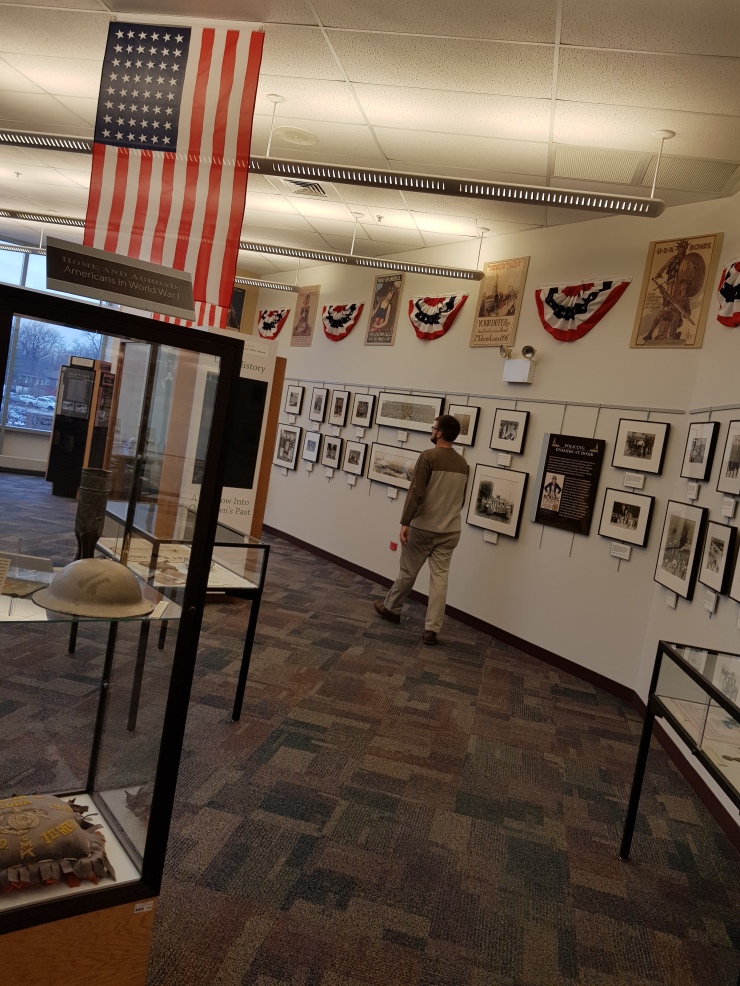 Kevin Korst,36, walking through the World War I gallery he constructed located at the Oak Lawn Public Library on the second floor.
Kevin Korst, 36, sat at his desk at the Oak Lawn Public Library, sifting through about ten-thousand historical photos looking for the right ones to form his latest exhibit. The Local History Manager at the library then stepped outside of his office and walked around the World War I gallery that him and his team put together, closely observing each artifact enclosed within rectangular glass and each photo framed and hung along the slanted beige wall as the bottoms of his brown dress shoes kissed the surface of the uniquely patterned brown carpet floor.
“I’m lucky that I found a job which I like to do and is also good for my skillset,” Korst said, “That’s kind of a hard thing to do sometimes and it’s been a good ride so far.”
Korst, entering his eleventh year at the Oak Lawn Public Library, spends hours at a time constructing galleries, writing novels, or working at the desk of the second floor of the library, answering the occasional phone call or answering questions from people visiting the library.
Janice Schaller, Korst’s assistant in the department of history, said “Working with Kevin is educational. He’s very knowledgeable about all things history so I learn something new every day. He continually looks for ways to expand his knowledge and is willing to share what he learns with other staff and patrons.”
Korst is the author of “Oak Lawn Tornado of 1967” as well as “Oak Lawn”, two novels detailing the history of Oak Lawn through a series of photographs and paragraphs. While pursuing his Bachelor’s in American history at St. Francis and Master’s at Eastern Illinois University, Korst wrote endless amounts of history papers that he credits helped him become the proficient writer he is today. Working with Arcadia Publishing, Korst published “Oak Lawn” in 2012, followed by “Oak Lawn Tornado of 1967” two years later.
“The whole process takes about over a year,” Korst said, “A lot of it is just selecting the photographs and doing the research on those photographs plus the general writing and editing, but they were great experiences and we got a great response from the community.”
Many Oak Lawn natives have shown massive interest in the history of their community and often refer to the library to learn from his novels and exhibits.
Mary Clare Sabio, a co-worker of Korst’s, said “His success has inspired me to push myself further out into the Community to work with the local schools and organizations to have programs that benefit both parties. We hope that after the Oak Lawn residents visit us for a library/school joint program, they will become lifelong Oak Lawn Library patrons.”
Korst often works hours upon hours at a time, switching between different projects he works on for the library. He describes some of his work as tedious, but overlooks the frustrating moments where the photographs just aren’t coming together or the writing isn’t flowing to his liking due to his love for history.
“The bottom line is you really have to like this,” Korst said, “Like if you do not like research and preservation and sort of work that can be tedious at times, then this is not for you. It’s a matter of knowing when to walk away and also setting expectations.”
When he does take the occasional break from history, Korst finds himself spending time with his family. The father of two can be found perched in front of his TV watching NFL games on a chilly Sunday afternoon in November or watching Cubs games on a humid Tuesday night in July. He also is a video game fanatic and is always game for a good book.
“I love reading, watching baseball, playing video games,” Korst said, “I have two kids that keep me busy and I love watching football.”
Korst’s outgoing personality and approachability make him easy to work and get along with, according to his co-workers.
“He gets it, even though he works in history,” Mary Williams, Korst’s supervisor of five years at the library, said, “He is super friendly, super-efficient, and great to work with.”
“He is a pleasure to work with. He is a very humble, dignified and intelligent person, even though he has had many accomplishments,” said Sabio, “he remains down to earth and open to suggestions.
Korst slowly finished circling around the World War I exhibit that he and his staff constructed and walked back in to his office. There were a variety of different projects for him to work on, as he was only about halfway through his shift. After a few minutes, he adjusted his rectangular-framed glasses and resumed sifting through the massive collection of black-and-white photos in search of the appropriate ones to include in his next exhibit or potentially a future novel.
“The community is very lucky to have him,” said Williams.
Source List
Kevin Korst
708-422-4990 x530
Janice Schaller
jschaller@olpl.org
Mary Clare Sabio
msabio@olpl.org
Mary Williams
mwilliams@olpl.org